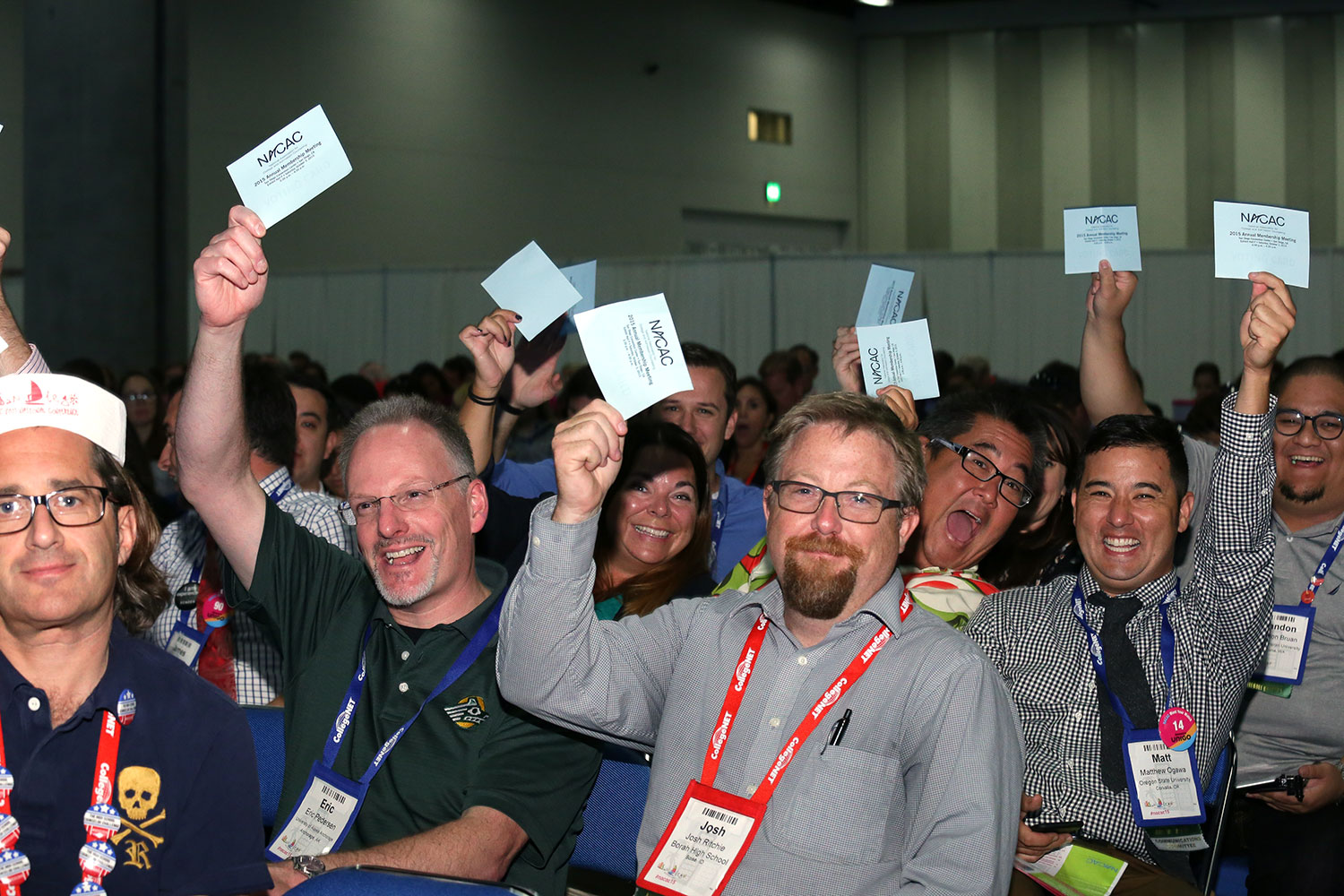 The 2015 NACAC General Assembly was, as always, an interesting opportunity to see the NACAC “machine” at work.  NACAC delegates, executive board members, candidates, and the Admission Practices committee worked through a variety of issues.  It promises to be a busy year for the NACAC AP Committee, especially with the advent of the “Prior Prior” FAFSA.

One of the biggest issues to be voted on by the Assembly this year related to colleges asking students for a list or ranking of colleges of interest. The assembly voted to change the language of Mandatory Practices Article II.B.2 to read as follows:

Colleges will “not ask candidates, their schools, their counselors, or others to list or rank order their college or university preferences on applications or other documents.”

As well, the assembly voted to add a new Footnote to Mandatory Practices for postsecondary members, Article II.B.2. that reads:

Additional motions were put forward by a number of affiliates, including Illinois, and you can see the recap of those motions below.  As well, Illinois ACAC put forward two motions, which you can see below, encouraging the NACAC Admission Practices committee to explore how to better enforce these issues.

To consider an SPGP change which would require that colleges utilize only the following NACAC terminology and definitions when naming their application plans:  Rolling Admission, Regular Decision, Early Action, Early Decision, and Restrictive Early Action.

Rationale:  The proliferation of application plans and deadlines causes confusion for students, parents, and counselors.  Terms like Priority, First/Second Fall Notification, Scholarship Consideration Deadline, etc. have increased students’ anxiety levels, and propelled the issue of applying earlier and earlier forward.  As we prepare for the changes that “prior prior” will bring, it would help to standardize this process for everyone. In addition, if NACAC membership holds a mission for access, we are making the application process more confusing for the least resourced students such as first generation and students who attend schools with poor counselor-to-student ratios.

To consider an SPGP change which would require that all colleges which offer a Restrictive Early Action (REA) plan ask students to make a commitment to the plan, similar to Early Decision, by requiring a signature from student, parent, and counselor.  Restrictive Early Action, according to the NACAC definition, allows students to apply to an institution of preference and receive a decision early; they may be restricted from applying ED or EA or REA to other institutions. If offered enrollment, they have until May 1 to confirm.

Rationale:  At this point, around 12 institutions utilize Restrictive Early Action, but, to our knowledge, do not ask students to complete a form stating that they understand the restrictions of the plan.  By asking student, parent, and counselor to “sign off” on a form, similar to Early Decision, students would understand and respect the guidelines of an REA application.

Under New Business, the 2015 Assembly Approved the Following Recommendations:

To explore language for the following two points, with the aim of bringing proposed amendments to the SPGP to the Assembly in 2016:

Recommendation to the Admission Practices Committee-Homeschooling:

To explore language for the following point with the aim of bringing proposed amendments to the SPGP to the Assembly in 2016:

By Mark Crawley Governors State University As admissions professionals, we…