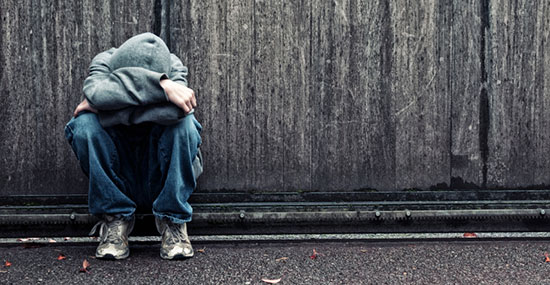 Manny lived in seven foster homes and attended five high schools. Sadly, he did not attend school at all until sixth grade due to the disordered family life caused by a mother addicted to crack. Manny now attends a community college and struggles to catch up on vocabulary and grammar. A recently-acquired part-time job across from campus allows him to have food, and a non-profit organization is helping with housing.

Tina became homeless after her father died and her mother shuttled in and out of jail; Tina was able to graduate from high school by staying with a friend’s family. Tina now attends a state college full-time while working “two and a half jobs” so that she has emergency money for hotel rooms; she doesn’t know where she will stay during breaks in the academic year.

Bianca, now a student at a prestigious four-year research university, aged out of the foster care system. She spent her young childhood panhandling with parents who knew passersby would be more generous to a child. Her roommate during the school year doesn’t know about Bianca’s background; Bianca is only comfortable opening up to another homeless student in a support group with whom she has become friends.

Quaris is a 37-year-old community college student who sees earning a degree as his only way out of poverty, yet he has no home and donated blood for $30 to pay his college application fee. Quaris keeps his possessions in two lockers on campus and spends as much time as possible in class or studying in open buildings.

Each of these real students (see links below) represent many homeless and unaccompanied youth who may be “hidden in plain sight” on our campuses and in our schools. It is estimated that 1.2 million children/youth were homeless in 2012-13 – a 10% increase over the previous year and a 24% increase from 2009-10 academic year  (Lee, 2013).

The Free Application for Federal Student Aid (FAFSA) in 2013 reflected that there are 58,000 homeless students on American campuses (Gross, 2013). However, many homeless and unaccompanied students do not know how to complete the FAFSA without having information from parents or guardians, much less a home address, and colleges are not required to track homeless students in any other way. FAFSA data represent only a slice of a growing population of students. In addition, counselors working with homeless and unaccompanied youth in high schools and colleges confirm that aggregate figures are underreported due to the stigma attached to self-disclosure. Many homeless and unaccompanied students in K-12 settings have sporadic attendance at school and do not even consider the possibility of college attendance.

The paths to becoming homeless or unaccompanied are varied; students may come from abusive or neglectful families where parents struggle with substance abuse, are violent, or suffer illness or death. Parents may move away due to financial crises or home foreclosure, or become incarcerated. Children may be forced out of their homes due to pregnancy, sexual orientation, problems at school, or conflicts with family members. Students may be runaways. Some students formally enter the foster care system and some are completely on their own. Homeless and unaccompanied students are often unable to fully concentrate on their education – they are concerned with necessities of food, shelter and basic hygiene or, in other words, survival.

Without a modest level of support, these young people are at risk for negative outcomes that follow them through life. A 2010 study by researchers at the University of Chicago found that only 6 percent of former foster care youths had earned a two- or four-year degree by age 24 (Dworsky & Courtney, 2010). For youths who leave foster care by age 17 or 18, one-third are arrested by age 19. Outcomes are better in states where youth can stay in the system through age 21 and qualify for federal aid, or where statewide educational systems have implemented supports. Although federal aid is available (grants up to $5,000 per year) to the thousands of students who age out of foster care through the John Chafee Foster Care Independence Program (CFCIP), states are responsible for determining how aid is provided and until what age.

“Seven states are considered to have particularly strong aid programs for former foster students. California’s is known as the Guardian Scholars. Texas, Ohio and North Carolina call theirs Reach; Michigan has Fostering Success Michigan; Washington, Passport to College Promise; and Virginia, Great Expectations” (Winerip, 2013). However, since only a portion of homeless students have come from the foster care system and there are criteria for eligibility that vary by state, many needy students are not covered by these scholarships.

A recent public radio segment revealed that there are nearly 55,000 homeless students in Illinois.

At DePaul University this issue has continued to emerge. And, it should not be surprising that once services to students on the margins started being offered, more and more students sought assistance. One initiative, the Student Food Pantry, offers a bag of groceries to food-insecure students weekly throughout the entire year. In the 2011-12 school year, 53 individual students utilized this resource. The following year the use increased 64% to 87 students. While we are glad to see these students garner the assistance they require, it leaves us to wonder how they managed before this initiative began. How many classes did they attend hungry?

One of the biggest struggles that homeless students reveal is that society assumes that young people have help, that someone is supporting them. Perhaps as education professionals we can be mindful that this assumption needs to be reexamined, and we all can consider what small gesture might mean the world to a student who is largely alone.

The National Association for the Education of Homeless Children and Youth (NAEHCY) is a national grassroots membership association that connects educators, parents, advocates, researchers, and service providers to ensure school enrollment, attendance and overall success for children and youth whose lives have been disrupted by the lack of safe, permanent, and adequate housing.

By René GomezLake Forest College  During our weekly staff meetings,…